WITF Board Chair Mark Van Blargan and WITF Search Committee Chair Mieke Driscoll today announced the selection of Ron Hetrick as WITF Public Media’s president and CEO. Hetrick, who had been serving as senior vice president of finance and administration for WITF, will assume the role effective April 2. 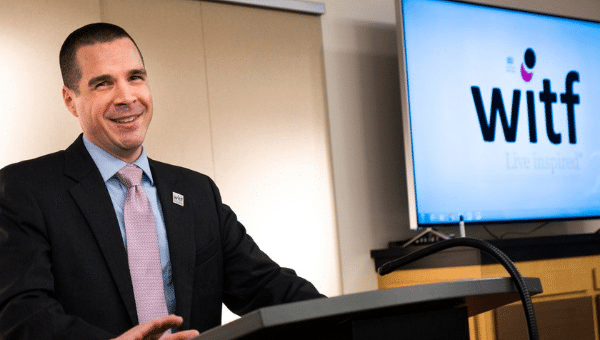 “Ron was persuasive and passionate about his vision for WITF’s future as a statewide leader in news and education in today’s rapidly changing digital environment,” Van Blargan said. Hetrick succeeds Kathleen Pavelko, who announced her retirement this past June after 19 years as CEO.

Commenting on the Search Committee’s process and work, Driscoll noted that the committee “had an impressive group of national candidates to consider, and conducted two rounds of interviews with presentations from the final candidates. Ron was the committee’s unanimous choice because he combined technology and financial expertise with a demonstrated commitment to WITF’s mission and strategic vision.”

“I am thrilled to continue my service in public media and to the community as WITF’s sixth president and CEO,” said Hetrick. “I look forward to ensuring WITF’s programs and services grow and remain accessible and relevant to our community in this time of technological change. We will work even harder to connect personally with our audience and ensure our programs and services reflect the diversity of the communities that we serve.”

Since joining WITF in 2000, Hetrick has taken on increasingly critical roles at WITF, with a key responsibility to ensure that WITF services and activities are strategically aligned with the organization’s vision and mission. As senior vice president of finance and administration since 2015, Hetrick supervised finance, philanthropy, corporate sponsorship and human resources, and served as a member of senior team tasked with content development, operations, business strategy and information technology.

Hetrick, a native of Harrisburg, earned his doctorate in business administration from Temple University; his master’s in business administration from Villanova University; and his bachelor’s of science in computer science and associates of science in electrical engineering technology from The Pennsylvania State University. Hetrick’s doctoral research explored the effects of corporate governance practices on nonprofit financial performance in institutions with accumulated wealth.

Hetrick is currently chair of the board of directors of the Public Media Business Association and previously served as board member and finance chair for Bishop McDevitt High School in Harrisburg, which at the time was engaged in a major capital campaign and construction project.