A Steelton native is heading the firm planning to transform six vacant blocks in the heart of the borough to “The Steel Works,’’ a mixed-use development featuring a grocery, brewpub and more than 75 apartments. 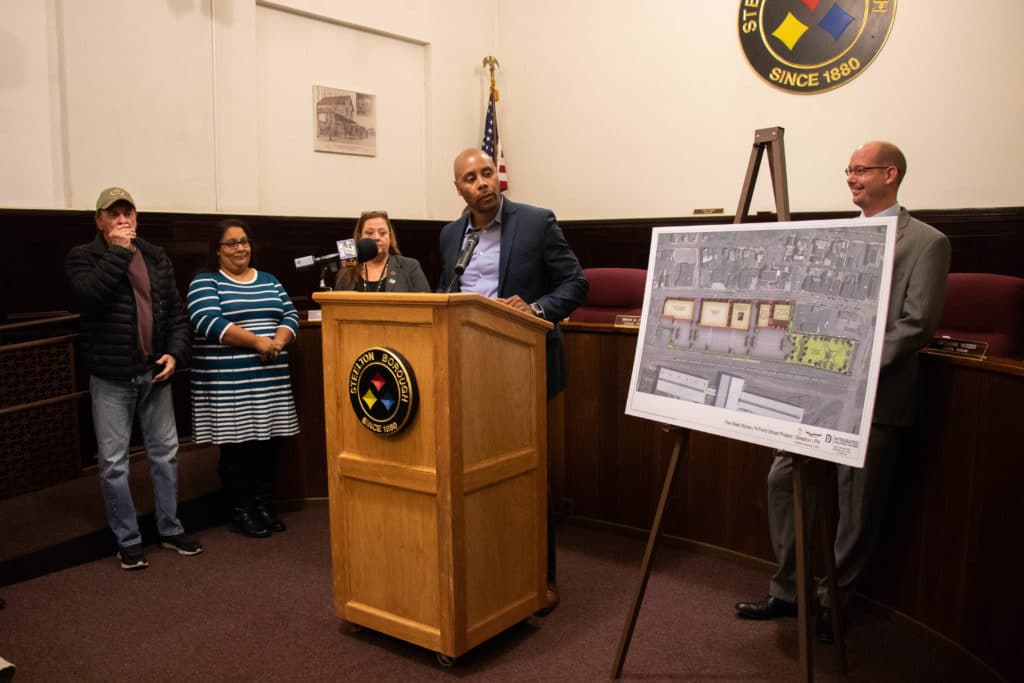 “It means a lot to me to do my first project in the town where I grew up and where I still have a lot of family,’’ said Bowser, the former CEO of the Cumberland Area Economic Development Corporation. “I believe this project will start to revitalize the borough and be a catalyst for additional development.’’

IDP purchased the land earlier this year for $375,000 from the Steelton Economic Development Corporation, which selected the firm after asking interested developers to submit plans. The search, managed by the Dauphin County Redevelopment Authority, began in the spring after the previous developer failed to get financing.

“This project shows what is possible when government works with the private sector to spur development that will lift an entire community and change lives,’’ said county board Chairman Jeff Haste, who oversees the Redevelopment Authority. “Steelton is an example of how Dauphin County partners with municipal officials to tackle blight and turn vacant industrial sites into prized assets.’’

IDP will benefit from a tax abatement zone approved last summer by the county, Steelton and the Steelton-Highspire School District. New construction will receive a 10-year, 100 percent tax abatement, meaning developers only pay property taxes at the pre-improvement rate.

Additionally, under the Commissioners’ Transformation Initiative to redevelop former industrial and commercial sites, the county used $230,000 of a $400,000 federal Environmental Protection Agency grant to conduct environmental assessments of the site needed before construction. Since 2011, the county also used more than $500,000 in gaming grants and federal block grants for Front Street improvements including new sidewalks and pedestrian crossing areas.

“We are excited to have IDP as our partner to finally develop this site and catalyze the revitalization of downtown Steelton,” said Steelton Borough Council President Brian Proctor. 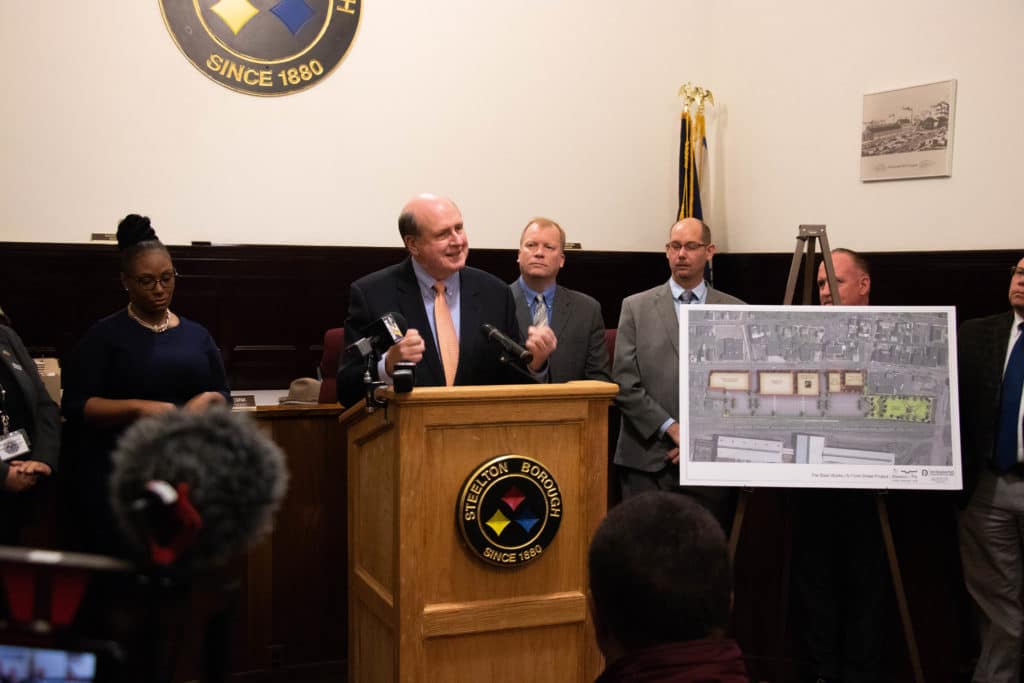 “IDP’s connection to Steelton, their knowledge of the town and its needs, their development vision, and their track record of success in Central Pennsylvania ensure that they will see a top-notch development to the finish line,’’ Beck said.

Plans for the Steel Works call for five separate buildings spanning 102 – 230 North Front Street, including a free-standing, 20,000-square-foot supermarket. A pair of four-story and three-story buildings will include a 6,000-square-foot brewpub along with a mix of retail and office space on the first floors and apartments above. Construction is expected to begin late fall next year or early 2020 and continue for 24 to 36 months.

“One of best ways we can help improve the lives of our residents is by transforming blighted and unused commercial properties and allow them to shine again, as we are doing in Steelton,’’ said Commissioner Mike Pries. “This project will have a positive economic ripple effect throughout the borough.’’

In addition to parking in the rear of the development, plans call for a large park and amphitheater called the “Brickyard’’ in recognition of the former brickyard on the old steel mill site. It will be able to host events and small concerts.

“Everyone knows I’m proud to be from Steelton, and today I’m doubly proud that a fellow Steelton native is allowing our borough to take a huge step to a new and prosperous future,’’ said Commissioner George P. Hartwick, III. “The Steel Works is the kind of project that will show other developers what is possible in Steelton.’’

Bowser praised county and local officials for creating the incentives that made it possible to obtain additional financing to make the project work. Developers typically get financing by showing the value of existing new construction, but in Steelton and other former factory towns that isn’t possible, which is why public sector assistance is critical, he said.

“The Steel Works will benefit the borough on multiple fronts,’’ Bowser said. “It will create new jobs and over time generate new tax revenue. Most importantly, it starts to build confidence in the real estate investment community that Steelton is a good place in which to do economic development projects.’’ 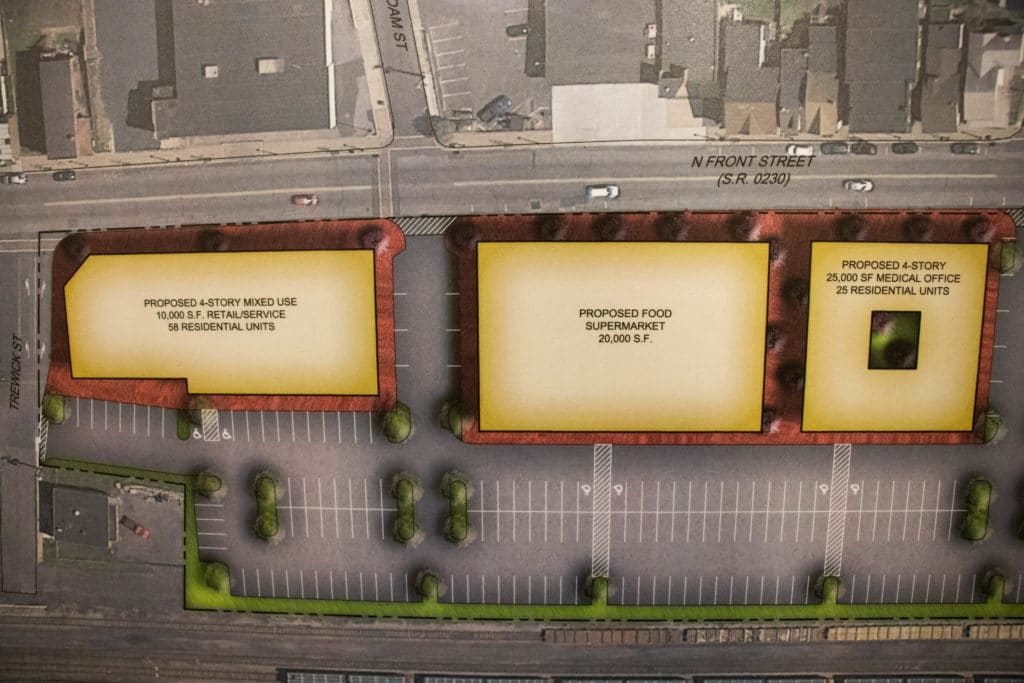 Future developers will also be able to take advantage of the tax incentives enjoyed by The Steel Works as part of the borough-wide Local Economic Revitalization Tax Assistance (LERTA) Program enacted last year.

As with The Steel Works, new construction and improvements done in the downtown commercial district along Front Street, between Conestoga Street to Strawberry Alley are eligible for 10 years of property tax relief.

That downtown zone also encompasses the 100 block of Adams Street to cover the Adams Street Townhouse Project, featuring 12, three-bedroom townhomes selling at below-market rates to qualifying buyers. The Tri-County Housing Development Authority is the developer and expects to begin construction on the first six homes later this year.