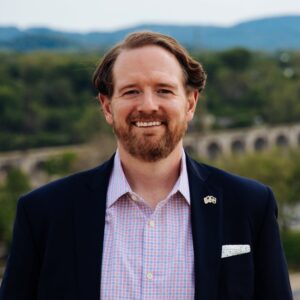 Ryan Unger joined the Harrisburg Regional Chamber & CREDC in July 2021 as President & CEO, bringing with him over 20 years of community and economic development experience on the local, regional, and state levels.

As the visionary and dynamic leader of the Chamber & CREDC and its staff, Ryan uses his leadership and guidance to make the organization inclusive, data driven, collaborative, and unapologetically positive about our region. Ryan believes in serving as a champion and advocate for our region and its business community.

A core part of Ryan’s day to day duties is developing and maintain solid working relationships with members, the community, elected and appointed city officials. Ryan represents the Chamber & CREDC at events and meetings that are important to the organization and the business community.

Prior to joining the Chamber & CREDC, Ryan served as the CEO of Team Pennsylvania, the commonwealth’s public-private partnership for economic and workforce development, consisting of business and government leaders, chaired by the Governor. Ryan is well-traveled through his business development mission trips in the United States, Europe, and South America. While at Team Pennsylvania, Ryan led the organization in the development of nationally recognized research and policy around agricultural economic development and petrochemical manufacturing.

Ryan’s experience in regional economic and community development includes time spent at SEDA-Council of Governments based in Lewisburg, PA, and the Greater Susquehanna Valley Chamber of Commerce based in Shamokin Dam, PA.

He has also been named to the U.S. Chamber of Commerce’s Committee of 100. This group of 100 local and state chamber executives advises the U.S. Chamber’s board of directors, enhance lobbying and coalition work, recommend programming, and strengthen outreach to the business and chamber communities.

When Ryan is not at the Chamber or meeting with local officials or businesses, you can spot Ryan walking his dog Teddy along Riverfront Park in Harrisburg at the Broad Street or West Shore Farmer’s Market or cheering on Penn State.

Ryan is always eager to meet residents and business owners of the Harrisburg Region, contact Ryan to set up a meeting today.