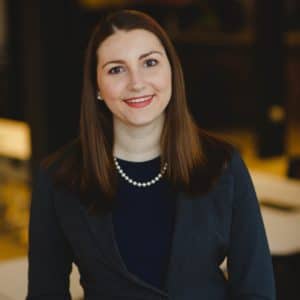 A fourth-generation member of the Harrisburg Regional Chamber & CREDC, Kara has a deep appreciation of the powerful personal impact of the Chamber’s mission.

Her great-grandfather started a construction business in the 1930s with nothing but a toolbox. The Harrisburg Chamber gave him connections to grow that business into a powerhouse that pulled his family out of poverty, created jobs in his community and improved countless lives. She is energized to continue the Chamber’s vital work today.

Kara joined the Chamber & CREDC staff as Vice President of Operations following nearly a decade in strategic communications agencies. Her life’s work has been giving a voice to those who would otherwise be drowned out, unheard and misunderstood. She has worked on both sides of the aisle of labor and industry, inside state government and political parties, and for community-based nonprofits. She played key roles in opening a casino resort, building a major highway interchange and introducing innovative health care programs.

A lifelong resident of Central PA, Kara is guided by her values of integrity, innovation and grace to make the Harrisburg Region a better place for everyone. She currently serves on the Board of Directors of Visit Hershey Harrisburg and Leadership Harrisburg Area, and on the Marketing Committee for Hospice of Central PA. Previously, she served on the board of directors for Harrisburg Young Professionals where she led the development of the Harrisburg Internship Connection, designed to retain future leaders by helping college students discover Harrisburg through a regional mentorship program. She is a frequent speaker and panelist, addressing audiences on topics including the opportunity-rich Harrisburg Region, her leadership philosophy and inspiring confidence in women.