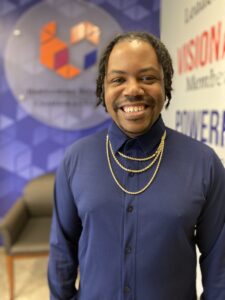 Jamel McMillian is a Harrisburg Native who brings 11 years of customer service experience to his role as Member Services Manager. He joined the Harrisburg Regional Chamber & CREDC in April 2022.

As Member Services Manager, Jamel helps to connect entrepreneurs and business professionals with resources that make a positive impact. He looks forward to bringing his positive attitude and message of inclusivity to all current and prospective members. The opportunity to engage with his community and promote inclusion is one of the many things that brought Jamel to his current position with the Chamber.

He began his career as a Loan Servicer with Pennsylvania Higher Education Assistance Agency, where he aided student loan borrowers in making higher education a reality. Jamel continued to grow his customer service skills at AT&T providing customer and technical support, then transitioned to his role as Membership Representative, Coordinator, and later the Executive Assistant with the East Shore YMCA. In this community focused role, Jamel recruited members, provided member support, and helped increase community engagement. He most recently worked for Spirit Moving Company as the Director of Operations where he oversaw communication with clients before, during, and after each moving job. He ensured the quality of job completion, performance, and overall customer satisfaction.

Jamel is a member of the first class to graduate from the Nativity School of Harrisburg, and an alumni of Trinity High School. He completed over three years at ITT Tech in the Criminal Justice field until the school’s closing.

When Jamel is not at The Chamber he can be found running around with his active son Zary’n. Jamel is passionate about providing for his son and advocating rights for all fathers.