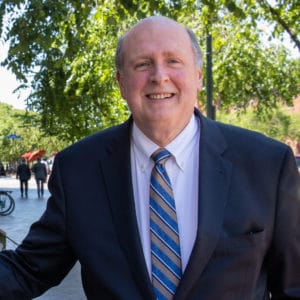 Current Focus: David E. Black serves as President & CEO of the Harrisburg Regional Chamber and Capital Region Economic Development Corporation (Chamber & CREDC). During his tenure, the Chamber & CREDC has developed a solid reputation for developing talented staff, quality events, member services, legislative advocacy, putting the region on the map and projects with over $500 M in economic impact, helping local businesses create and retain over 12,400 jobs in the Harrisburg Region (Cumberland, Dauphin and Perry Counties).  The organization has also received 5 Star Accreditation from the US Chamber, the highest rating a local chamber can receive something that less than 1% of Chamber’s nationwide have earned.

In addition to his duties at the Chamber & CREDC, Black  serves on many Boards of Directors including: Life Sciences Greenhouse of Central PA, Hershey Center for Applied Research, Harristown Development Corporation, Hershey-Harrisburg Visitors Bureau, Pennsylvania Economic Development Association, PHC4 the PA Farm Show Commission.  Black and the Chamber & CREDC have been involved in the City of Harrisburg’s journey to fiscal recovery over the past several years.

Professional Background: Before joining the Chamber & CREDC in 2001 , Dave served in several key roles for Governor Tom Ridge such as the merger of the former Department of Community Affairs (DCA) into the Department of Commerce creating the Department of Community and Economic Development (DCED) and the original Keystone Opportunity Zones.  He also served as COO of Team Pennsylvania where he helped Governor Ridge restructures the Foundation as a long term public/private sector tool for economic development in Pennsylvania.

He is native of Clarion County in Northwestern Pennsylvania where he served as a County Commissioner. He was first elected to countywide public office at the age of 26. He also served as Vice President of First American Municipals.

Education: Dave has a B.A. from Westminster College and did graduate work in Public Administration at Slippery Rock University.

Personal: Dave and his wife, Shirley, reside in Cumberland County.  They have two grown children, Erin and Jonathan, two granddaughters Madison and Mackenzie and a grandson Bennett.