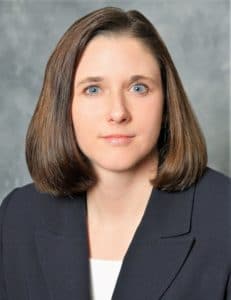 “This class has given me increased insight into the capital region and our duty to be servant leaders in all that we do throughout the community,’’ Williams said. “It was exciting and inspiring to meet with others who share my commitment to working for positive and lasting change.’’

At Boyer and Ritter, Williams co-chairs the firm’s Employee Benefit Plan Services Group and provides various audit, accounting, tax and consulting services to a variety of clients. A CPA, Williams earned her Bachelor of Science in Accounting from Edinboro University of Pennsylvania in 1997.

Since 2006, Williams has served as board treasurer for the Commuter Services of Pennsylvania, which promotes air quality and congestion mitigation through alternate modes of transportation other than driving alone to work. Earlier this year, Kim joined the finance committee of the United Way of the Capital Region.

For nearly a century, Boyer & Ritter has provided accounting, auditing, tax, and consulting services to businesses of varying sizes and industries throughout Pennsylvania and the continental United States. Boyer & Ritter has offices in Camp Hill, Carlisle, Chambersburg, and State College.